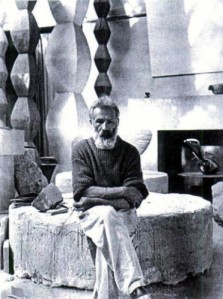 EUROPALIA focuses on Romania, and its flagship event is a prestigious retrospective of Constantin Brancusi (1876-1957).

5 things you should know about the man who might just be the greatest sculptor of the 20th century:

Brancusi, a proud Romanian, grew up in a poor household in the tiny village of Hobița. From the age of 7 he roamed the countryside as a shepherd and held several menial jobs like cooper, potter and dyer. Till the end of his life Brancusi would dress in the way of the Romanian peasants, serve his guests traditional Romanian food, and loved to sing Romanian folk songs.

Chances are no one will know who you are talking about in Romania when you mention the name ‘Brancusi’. Not that he’s not well known there, quite the contrary, as Romania is rightly very proud of their most famous artist. It’s just that they pronounce it differently. The ‘I’ is not the letter ‘I’ but rather a mark to indicate the pronunciation of the ‘s’. So in Romanian you would say ‘bran-koosh’.

END_OF_DOCUMENT_TOKEN_TO_BE_REPLACED

Arte, Civilizaţie/Cultură, Personalităţi | Etichetat: 5 things you should know about the man who might just be the greatest sculptor of the 20th century, „România magnifică”, Bozar - Centre for fine arts, Brancusi a proud Romanian, Constantin Brancusi, Valentin-Nicolae Bercă |